A great example of this domination is what happened to Hewlett-Packard. The well-known tech company waved the flag when its HP TouchPad tablet sold dismally in the market. RIMâ€™s own Playbook tablet is also exhibiting anemic sales and Samsung â€“ arguably Appleâ€™s biggest tablet competitor â€“ has reported very weak sales for its 7-inch Galaxy Tab. Now you can add Sharp to the list of also-rans. The Japanese company has announced that it is going to discontinue two of the three Galapagos tablets it has released to the market less than twelve months ago. END_OF_DOCUMENT_TOKEN_TO_BE_REPLACED It looks like the boys and girls at Cupertino have launched an official app for their app store, allowing Apple fans too lazy to fight the iFaithful in the physical world to order their gear from the palm of their hands.

Buy Apple products and accessories, read customer reviews, find an Apple Retail Store, stay up to date with in-store events, and make Personal Shopping, Genius Bar, or One to One appointments.

This should make pre ordering iPhone 4 (or even the glorious iPad) much easier for iFans, as the app connects directly with your iTunes account (so make sure you have plenty of fundsÂ availableÂ before ordering).

While an official Apple App was long over due, what is puzzling is the fact that Apple didn’t make their app “iPad friendly.” END_OF_DOCUMENT_TOKEN_TO_BE_REPLACED And what was Apple’s reason? Apparently, the iPad has been pretty successful in the U.S. that Apple could no longer meet the increasing demand for the iPad resulting to inadequate supply. So to meet the U.S. demand for the iPad, Apple will most likely be using its allotment for the international market.

Faced with this surprisingly strong US demand, we have made the difficult decision to postpone the international launch of iPad by one month, until the end of May. We will announce international pricing and begin taking online pre-orders on Monday, May 10. We know that many international customers waiting to buy an iPad will be disappointed by this news, but we hope they will be pleased to learn the reasonâ€”the iPad is a runaway success in the US thus far.

This is only for the current available iPad model which is the Wi-Fi version. Apple is also reported that pre-orders for the iPad 3G version is also increasing. The iPad WiFi + 3G will be deliver by the end of April.

Now here’s the good news, Apple also announced that it will start accepting pre-orders from selected international customers starting May 10. Â International pricing is yet to be announced though.

If you’re like me who have been monitoring Techmeme and other tech news aggregator, you’d probably noticed that iPad news and rumors starting propagating on the Internet starting last Saturday. Well, what do you expect? It’s one week before the iPads reach the doors of those those so called “idiots”, that includes me who pre-ordered Apple’s magical device since two weeks ago.

Let’s see, Apple has sold out the first wave of its iPad stocks, prompting the iPad Store to indicate that new orders of iPads won’t ship until April 12. Then there are various leaked screenshots of the iPad stores and the cool applications that will be released on launch day. Some of these apps are games, while some are useful productivity tools. These are just some of the iPad-related headlines that went out last weekend.

And today, exactly five days before the iPad arrives to those who pre-ordered it, the hype is even building up some more.

First, according to an official PR, the iPad will be available in Best Buy on April 3. Now, there’s a catch however. Reports say that only 15 units of iPad will arrive on each of the hundreds of Best Buy brick and mortar stores.

What’s interesting is the fact that Apple is no longer accepting on-store pick-up for new orders of the iPad and prefers to ship them out instead.

Oh, in case you’ve pre-ordered your iPad, you should have received a notification on your email stating that Apple has started shipping your Â iPad. Just in time for the promised April 3 delivery date. Isn’t that exciting?

So, how are you psyching up yourself for the arrival of your iPad? What apps are you planning to purchase from the iPad Apps Store? When the issue on the e-books pricing of those who will be in the iPad’s iBookstore started spreading, many are saying that it will be to Amazon’s advantage. Â The Kindle Store’s average price for an e-book is pegged at $9.99 and Amazon is even sacrificing some sales just to maintain this pricing even at a loss for them.

Analysts are saying that the iBookstore will not be able to compete against this pricing and that e-books to be sold will be priced higher than the e-books sold in the Kindle Store.

That may not be necessarily true at all. Â The blog AppAdvice got hold of a preview that shows otherwise. It seems that most e-books that will be sold in the iBookstore Â are also priced at $9.99. In fact, out of the 32 e-books that were on the New York Time’s Bestsellers, 27 titles have $9.99 price tag.

If the iBookstore will be able maintain this price ceilings for most of the books that will be made available once the iPad is launched, Amazon is definitely facing a stiff challenge to their well established and widely accepted e-book business. Â Indeed Amazon has all the reason to be worried and should start working on various enhancements to the Kindle store as well possibly on the Kindle device as well. Â But except for the lack of color display and other computing functionalities, I think Amazon may have already exhausted all possible features that it could probably include in the Kindle. 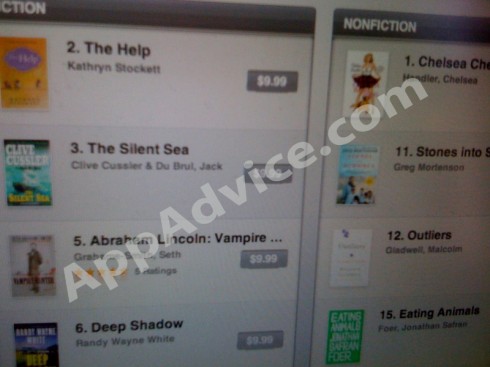