Although it’s only for February, still we could not discount the fact that Google is slowly gaining grounds in the web browser market with the continously improving Chrome browser. Want proof? The latest data collected by Net Applications, a web metrics company is showing that for Google Chrome is the only browser that made some gains in February.

Google Chrome registered an increase of 5.61% in market share from January’s 5.22%, up by 0.39%. Although it’s market share is still not big enough at 0.96% share, still this quite an achievement for Google Chrome, considering that it came late into the web browser party.

Again, it’s a minimal increase and Google has a long way to go to make Chrome browser overtakes or even be at par with both IE and Firefox, but given Google’s marketing strategy plus its continuing effort to enhance Chrome browser, it will just be a matter of time before it becomes a powerful contender in the web browser wars. So this is how Microsoft responds to Google making Internet Explorer better with Google Chrome Frame: vague mumblings about security. Says a Microsoft spokesperson:

“Given the security issues with plugins in general and Google Chrome in particular, Google Chrome Frame running as a plugin has doubled the attach area for malware and malicious scripts. This is not a risk we would recommend our friends and families take.”

Love how he sticks in your family to tug at your heartstrings. Good luck making people believe such FUD. Chrome was the only browser left standing after a recent hacking contest. If anything, Chrome is more secure than IE.

Even to people who don’t follow browser hacking contests, Google is the most trusted brand in America. It’ll take a lot more than Microsoft’s blatantly anticompetitive mumblings about security to break that trust.

(Photo via Odyssey Consulting. I actually do have a migraine right now; I’m allergic to bullshit.) 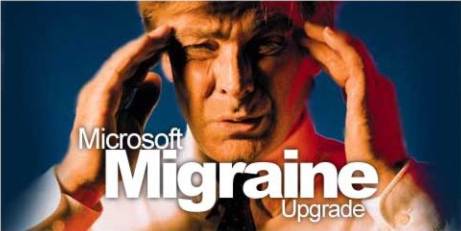 Google has devised a devilishy clever fix for the infamous weaknesses of Internet Explorer: turn it into Chrome. Google Chrome Frame is an open-source plugin for Internet Explorer that makes it behave like Google Chrome, complete with faster JavaScript and HTML5 support. END_OF_DOCUMENT_TOKEN_TO_BE_REPLACED After the debacle around the by Microsoft sponsored internet browser security survey the Redmond company continues the smug and now publicly doubts the download numbers for the open source Firefox browser.

Senior Executive Any Barzdukas went as far as saying that the celebrated 1billion downloads “interesting maths” were. Barzdukas, who surprisingly is General Manager at MSFT in charge of the much loathed Internet Explorer, did not detail her claim but let some vague Marketing smug lose:

“As with any marketing statement, I’d encourage people to be somewhat sceptical about large number claims,” she said.

“It’s an interesting number and I have not seen the math [but] how many internet connected users are there? 1.1 billion, 1.5 billion, something in that area.”

The Executive further announced that the company will continue to support its Achilles heel, Internet Explorer 6 because users apparently are satisfied with the browser or not aware of the availability if newer versions for the browser.

“The reason that a consumer would still be on IE6 at this point is a lack of awareness or the ‘good enough’ problem,” she said. “If you’re satisfied with what you’re doing and you’re not particularly curious about new technology and don’t really care, upgrading sounds like a hassle. Part of our communication needs to be making clear that there are significant advantages to upgrading to a modern browser.”

Personally I would say that the main reason users still use the security flawed IE6 browser the, just as security flawed ActiveX script, applications are which are used on many internet and intranet websites which require IE6. Not the fact that users can not be bothered to upload. Many a system administrator MUST continue to block updates because companies will not make resources to upgrade large intranets, relying on since IE7 deprecated code.

Not so surprisingly, Firefox has since long surpassed the popularity of IE6 and continues to grow in popularity.