Google is really making sure that all its mobile products and services that it has released for the iPhone get into its flagship mobile device, the Nexus One as well. The latest of these products is the cool Google Earth mobile app which has just been outed and ready for use on Android 2.1 phones, which if you might have guessed by now include the Nexus One.

So, what does the Google Earth for Nexus One offers? Many good things actually. The app is taking advantage of the phones 1GHz processor, advanced 3D graphics and of course Android 2.1 OS. Â With those, you’ll get a cool mobile app that is on its fastest version so far – with smooth framerate rendered on a beautiful 800×480 screen resolution.

Google Earth for Android, or should I say for Nexus One packs in some great new features as well, which is not present in its iPhone iteration. The roads layer for one was carried over from the desktop version of Google Earth. This layer tells you where you are when viewing Google Earth on top of the satellite imagery.

Another nice feature takes full use of the Nexus One’s voice recognition functionality into Google Earth search feature. You can speak out a location name to search for its exact location on the globe.

The app also lets you browse photos, places and local businesses no matter where those are located. It also allows you to customize your own version of Google Earth.

You can grab the Google Earth for Android app from the Android market by searching for it on your Nexus One phone. Google says it will soon be available to other Android phones with version 2.1 or later of the mobile OS.

I’ve downloaded the app on my Nexus One, and so far the app seems pretty good. 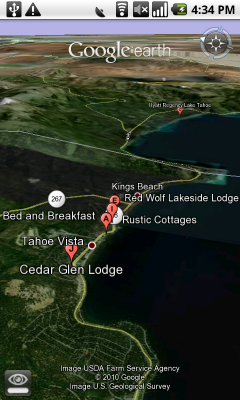