You see them all the time, right? Top ten gadgets of the holiday shopping season, or five must-have gadgets that are coming next year? The gadget-related titles and content are all over the internet, and that must mean that people are buying them in droves. But why?

That’s a great question. Here are six reasons people love to buy gadgets for themselves and others. END_OF_DOCUMENT_TOKEN_TO_BE_REPLACED 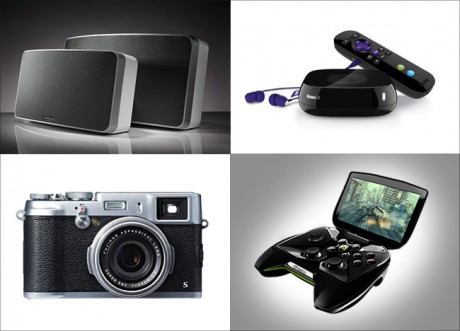 When the unlocked, Google-branded Nexus One handset hits the market next year, Google unleashes a two-pronged attack on the Apple iPhone. On one hand, normal people will continue to buy subsidized but locked Android handsets provided by the cellular service carriers. That’s the space the iPhone plays in right now.

On the other hand, hardware geeks will buy expensive but unlocked Google phones provided by the Mountain View powerhouse itself. Thanks to Steve Jobs’ five-year dark bargain with AT&T, that’s a space in which the iPhone simply will not compete.

Thus, Google’s mobile platform allows third parties to maintain walled gardens (carrier-branded handsets with contracts) while maintaining a completely open playground (unlocked handsets). They take on two imporant market segments simultaneously: the common consumers who flock to the walled gardens, and the early adopters in the playground who influence the common consumers. Time will tell if such outflanking will make a dent in the iPhone’s market share.

In the meantime, you have to wonder what the Nexus One bodes for the direction of Google’s upcoming browser-based operating system, the Google Chrome OS, slated for release almost a year after the Nexus One. The potential parallels are certainly intriguing.

Chrome OS will come bundled as an OEM release with very specifically-designed SSD netbooks from various computer manufacturers. Those machines would directly parallel the carrier-locked Android handsets provided by various cellphone manufacturers. If the parallelism holds, could Google release its own hardware for the Chrome OS, the same way it’s now releasing its own hardware for the Android mobile OS? As demonstrated by the Psystar case, Apple is willing to do the latter (provide its own hardware), but not the former (allow branding from third-party manufacturers). The Mountain View geniuses would outflank the Cupertino tyrants once more. Could Google’s two-pronged mobile OS strategy serve as a miniature version (no pun intended) of its future two-pronged desktop OS strategy?

Either way, the current geek hullabaloo over the Nexus One undeniably proves one thing: the existence of a strong demand for Google-branded consumer hardware among the influential blogging-and-twittering digerati. Google can leverage that demand in future consumer hardware projects. We can still expect the bulk of Google Android’s market penetration to come from the carrier-locked handsets, but the geeks will continue to generate buzz about the Google-branded handsets. That’s why T-Mobile and Verizon, who both carry Android handsets, aren’t freaking out right now: the buzz around the expensive Nexus One will help drum up sales for the subsidized G1 and Droid.

Though the actual manufacturing of the Nexus One has been contracted to HTC, there is absolutely no HTC branding on the Nexus One. It’s a Google-branded phone, through and through. High-end hardware manufacturing as word-of-mouth marketing is not a new concept. Though not traditionally a hardware provider, perhaps Google will become the next industry titan to apply that concept — for both Android and Chrome OS.

(The photo above is courtesy of Engadget.)

Once again, Verizon plays up the hardcore techie appeal of the Google Android-based Motorola Droid. Their latest advertisement contrasts the Droid’s raw mechanistic power with the iPhone’s glitz and glamour. In the words of this particularly edgy ad, the iPhone is a “digitally clueless beauty pageant queen”.

Contrary to Apple’s claims, more than one frustrated developer would probably agree with that assessment. After all, the iPhone app approval process is as fickle and arbitrary as any blonde bimbo. Sure, you’d show off your beauty queen girlfriend in public, and you’d certainly have lots of fun with her in private — but she probably wouldn’t make the most engaging conversationalist, or the most effective executive assistant.

With the open application development offered by the Google Android mobile OS, Verizon is clearly positioning the Motorola Droid not as a buxom blonde beauty queen, but as a fluent and flexible executive assistant. That certainly jives with their thrust to get developers and early adopters using the thing. Geeks love girls with glasses.

Love him or hate him, Internet marketer Joel Comm has been bringing us fun stuff decade after decade. In 1996, he founded the company that Yahoo bought and turned into Yahoo Games. At the end of 2008, he released iFart Mobile, which spent three weeks at the top of the iPhone app charts.

That’s why Apple CEO Steve Jobs should listen to Joel when he vents his frustration over the rejection of his latest iPhone app — especially when the app store carries so many other applications with similar functionalities.

Joel’s appeal should help remind Appleâ€™s SVP of Worldwide Product Marketing Phil Schiller that, contrary to his deluded claims, developers are not happy with the arbitrary and opaque iPhone store approval process.

If want to create/consume rich new media at the blazingly fast pace of today’s Internet, you need tools that can keep up. Here’s one of those tools. Breaking world processor speed records, the AMD Phenom II has been successfully overclocked to an astonishing 7.08 gigahertz.

That’s a lot of liquid helium.