We all know how formidable Facebook is, Â as a social media site capable of generating traffic to websites and in terms of userbase as well. Next to Facebook, we always think of Twitter. Â We never really thought about other sites, such as StumbleUpon perhaps? Now here’s an interesting statistics published by StatCounter covering the amount of traffic generated by social media sites that leads to website page views. The statistics cover Mar 2009 to Mar 2010. And guess what in 2009? Â StumbleUpon use to bring more traffic to websites than Facebook does.

So, what’s the importance of these statistics? From a business perspective this only goes to show that social media sites could be a good tool for driving traffic to business sites. Hence, we now see more brands having their Facebook pages linked to their individual corporate websites.

â€œSocial Media market share fluctuates a lot more than browser or search statistics. For example, Facebook peaked over Christmas and the New Year with almost three quarters of the total, perhaps reflecting its important role in communications between families and friends.â€

In case you’re wondering StatCounter’s data was based on 13 billion page views across the globel StatCounter network of member sites.

So there, if your Â company does not have a social media presence yet, you might want to start creating one on Facebook, especially now that there are many things happening with Facebook in terms of features and functionality. Among those who are taking advantage of the growing traffic on Facebook are mobile carriers which created their own Facebook Fan Pages. Â Major wireless carriers such as AT&T, Sprint, T-Mobile and Verizon Wireless have their own respective Pages on Facebook which they used as marketing tool containing company profile and other content related to their products and services. Â While these Pages maybe a good marketing tool, the question is – are these Pages driving traffic towards the wireless carriers’ websites?

Compete’s data and analysis say yes. According to Compete, traffic as well as engagement to these fan pages have been increasing over the past few months.

Measuring level of user engagement on Facebook fan pages and comparing them among wireless carriers, Compete’s analysis yielded the following:

While engagement data were not significantly high, it would be interesting to note that spikes occur whenever these wireless carriers are announcing new features, products and services. And that’s also the time when Facebook Pages are driving more traffic to the wireless carrriers’ websites. END_OF_DOCUMENT_TOKEN_TO_BE_REPLACED Comscore’s latest report on social networking activity in Asia-Pacific region shows that 50.8% of the total online population visited a social networking site in February 2010. This amounts to around 240.3 million visitors. As expected, Facebook ranked as the top social network across the region.

Will Hodgman, comScore executive vice president for Asia Pacific said that while social networking continues to be one of the most popular and fastest growing web activities in the world, its dynamics in the Asia-Pacific region exhibits significantly more individual market differentiation than in other global regions.

â€œIn some markets, such as the Philippines, Australia and Indonesia, social networking is one of the most popular Web activities reaching nearly 90 percent of the entire Internet population, while other markets report less PC-based social networking penetration, which can often be attributed to the high propensity to engage in social networking via mobile devices in these markets,â€ says Mr. Hodgman.

In terms of social networking penetration, the report found out that users in the Philippines have the highest level of Â engagement, with majority of the online population spending an average of 5.5 hours on social networks. Users in Indonesia follow with 5.4 hours per visitor, Australia with 3.8 hours and Malaysia with 3.8 hours as well.

The report did not include visits to social networking sites through mobile and PDA devices as well as from public computers such as internet cafes which is a big industry in most Asian countries. Fans of Mafia Wars on Facebook would be glad to know that Zynga, the game’s developer has just enabled full mobile access features. Â Whereas previously, the game’s mobile feature only allows users to receive updates of what was happening with their games, the new mobile features now allows you to do more activities.

To register for this feature you need to register from the Mafia Wars Facebook app page. Â The SMS Mobile feature link can be found from the HELP option on the main Mafia Wars page. You need to sign up your mobile phone number. And right after registration you can start sending “MAFIA” plus action commands such as “FF” for fighting your last opponent, “J” for doing a job and other available SMS commands. Â Send your SMS to the number (623-42). To get a list of commands, simply send “? to the said number.

Now, while this might seem an honest move on Zynga to inrease the engagement level of Mafia Wars players, this may also lead these members to purchase virtual good via their mobile phones.

What I’m not really sure is how Facebook will take this mobile feature as it will certainly take away valuable site eyeballs on Facebook.com. Of course, since you will be using your mobile phones, be reminded that those SMS messages will entail charges on your end. Â But if you don’t mind spending on SMS just to play Mafia Wars via text, then check out the new Mafia Wars Mobile feature. 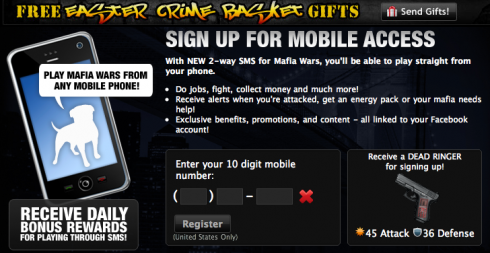 With the increasing popularity and media mileage being gained by location-based social networking sites such as Gowalla and Foursquare, it is not surprising that the Facebook people will take notice of this. And this could be threatening to Facebook especially since this location-based social networking services can take away a number Â of users from them.

So, what’s the best way to handle this threat? – Facebook decides to offer the same location-based services. NYT Bits Blog is reporting that Facebook is preparing to launch a new feature that will allow users to share their location. Â This will be launched in late April, just in time for Facebook’s f8 developer conference.

What this means is that starting April expect to receive status updates from your friends stating their current locations. But of course, sharing location among friends is just the tip of the iceberg. Â This new feature could also be the start of a social recommedation feature which eventually would bring in more brand participation Facebook.

Facebook’s location feature will either be through Facebook’s site or through APIs that will be made available to small time developers.

It’s too early to tell whether which of the location-based services will this new Facebook kill. Although according to the report, Facebook is not really eyeing any of these startups but rather a bigger competitor – Google with its small-business advertising program powered by Google Latitude.