Cameras have become the de rigeur feature for practically every portable electronic device out in the market today. You can find it in tablets, music players, and probably 99 percent of every phone that is being manufactured today. But such a benign tech feature is being used for more creepy purposes, if weâ€™re to base it on a new survey released by Harris Interactive.

The survey, which was conducted with more than 2,300 people in the United States, revealed that half of American adults would have no qualms filming secret videos of other people without their knowledge. The surveyed people didnâ€™t necessarily get into a situation or an opportunity to film or spy on others, but they did mention several scenarios that will compel them to bring out their smart phones and film other people. END_OF_DOCUMENT_TOKEN_TO_BE_REPLACED After six years ofÂ existenceÂ Google’s social video king still remains on the thrown, as the YouTube team revealed a couple of impressive stats regarding the site’s popularity.

Today,Â more than 48 hours (two days worth) of video are uploaded to the site every minute, a 37% increase over the last six months and 100% over last year. […]

Weâ€™re amazed that over this last weekend, you drove YouTube past the 3 billion views a day mark, a 50% increase over last year. Thatâ€™s the equivalent of nearly half the worldâ€™s population watching a YouTube video each day, or every U.S. resident watching at least nine videos a day.Â (Official YouTube Blog)

While YouTube has pioneered the path towards making videos more social, the service has yet to embrace live streaming en masse (although they do allow select partners to broadcast videos in real time).

Note: It will be interesting to see if rivals like Microsoft (who just purchased Qik) will make a second attempt to challenge YouTube in the future, or leave it up to Facebook to steal Google’s crown.

It looks like Google is on the verge of slaying another industry with reports that the search giant is attempting to live stream sporting events which include one popular sports league.

YouTube aims to show more live sports in the second half of the year, said Gautam Anand, Googleâ€™s director of content partnerships for Asia Pacific, in an interview in Seoul yesterday. Google is in talks with â€œmost pro sports leaguesâ€ including NBA and NHL, as well as soccer leagues inÂ Europe, Brian Suh, head of YouTube Partnership at Googleâ€™s Korean unit, said separately. (Bloomberg)

Thanks in part to services like Hulu, Netflix and online live news (at least on CNN and Fox), I barely watch television as it is with the exception of American Football (which you have to see live in order to enjoy the game).

There is no word on whether YouTube will live stream events upon mobile devices and large touchscreen devices (at least upon Android tablets), which would make it easier to watch ones team when a TV isn’t readily available.

While live streaming games online will not kill off television entirely (as there are probably more people with TV’s than internet service, at least within the US), it could help sporting leagues reach a larger audience, not to mention generate more revenue via mobile ads as well. Musicians big and small will now have a new reason to rejoice about Android as Google has just provided a new way to generate some revenue off of the millions of users who watch their music videos everyday.

Starting today, weâ€™re welcomingÂ VEVOâ€™s extensive library of official music videos from artists like Lady Gaga, Rihanna, Kanye West and U2 onto the YouTube 2.0 app for Android, available around the world. To watch these videos your mobile phone needs to be running Android 2.2 (Froyo). Â […]

In addition to these features, tens of thousands of YouTube partner videos will also now have pre-roll ads appear on the YouTube 2.0 app for Android. This not only expands distribution opportunities for partners like VEVO, but also opens up more revenue to partners distributing their content to mobile. Although weâ€™veÂ tested ads on mobile over the years, this is our largest step in mobile monetization to date. (Official YouTube Blog)

Google also announced that the mobile ad market is on course to generate $1 billion in 2011, which should help convince a few artists to allow their music videos to be viewed upon mobile devices (as many artists only allow them to be viewed by desktops and notebooks).

With more users sporting an Android device, extending the ability to view their favorite videos upon their smartphone makes sense as it can help “starving artists” pay the bills (especially as the world climbs out of a recession). 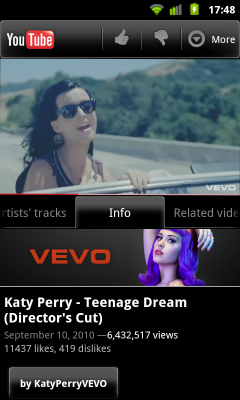 The boys and girls at YouTube are celebrating reaching a billion subscriptions over various channels by releasing a new widget for web masters and bloggers alike.

Early on (we’re talking ’06 here, people!), the yellow subscribe button made its debut so the latest videos from your favorite channels could make a beeline to your inbox/eager eyes. Today, the button thatâ€™s beenÂ immortalized as a throw cushion hits an important landmark: itâ€™s been clicked over one billion times. And who was the lucky channel to get that billionth hit? It wasÂ MachinimaSports, who are, not coincidentally, on our homepage on Friday. […]

So whatâ€™s next for subscriptions? Turns out, weâ€™ve got a spankinâ€™ new widget that any video-maker can embed on his/her website or blog. It lets people subscribe to your YouTube channel with a single click, without having to leave your site to log into YouTube or to confirm their subscription. The entire process happens in the widget. (Official YouTube Blog)

YouTube seems to borrow a page (no pun intended) from Facebook, in which the company removes any barrier that may hinder a reader from subscribing to your videos.

Being the geeks that they are, the Google folks provided users with the raw html in order to create a widget upon one’s blog or website, although over the next few days we will hopefully see various widgets, plugins or modules created by third party developers (or perhaps even YouTube themselves).

YouTube’s billion subscriptions puts the site well ahead of Facebook (who currently boasts 500 million users), and with the social video king experimenting with live streaming we may see the day where YouTube reaches its 2 billionth subscriber in the not too distant future.