Big announcement today from MSN, Microsoft’s content network property, as big as their homepage which has just unveiled its new look and feel. Â If you’re in the U.S. and you visit MSN from time to time if not on a daily basis, you’ll notice that the website is kind of different right now. Basically, MSN now focuses on four main deliverables – news, social networking, local networking and of course – Bing search.

Actually, the redesign has began as early as November 2009. MSN has been gathering feedback while answering those meaningful ones by way of updates to the site. In fact, they have made 30 updates since November, all courtesy of MSN users who’ve sent their feedback to MSN.

So, what are the new features of the MSN site? Here are the major ones:

Media and News – The homepage now has more media and news items including HD video viewing.

Social Networking – Social networking module of the homepage is now default to Facebook, being the most frequently used, according to MSN.

Basically, MSN is going into the same content-rich homepage design of Yahoo’s content network – something that delivers the goodies to users all in one place. Hopefully, this sparks more interest into the site and converts to more monthly eyeballs for MSN.

The GroundMap Application Demo from Eric Bieller on Vimeo.

We’ve seen various startups tried aggregating various social media streams such as tweets and Facebook updates. But none of them have utilized the power of geotagging. Until now, with new startup GroundMap and its new social media platform.

The idea is pretty simple and yet could be powerful. GroundMap lets you bucket geotagged social media streams and by that we mean all types of streams and not just tweets or reviews like what others are doing.

So, GroundMap lets you add PDF documents, YouTube videos, Flickr photos, Scribd documents, Google Maps, as well as Twitter and Facebook updates, under a particular geotag. All these streams become searchable on GroundMap by their locations or geotags and the platform presents it in a timeline format called GroundMap activity stream.

In addition, you can also search for activity streams using the tag cloud on GroundMap’s main page. It also allows you to add location which are not yet in the tag cloud. Once other users starts using the geotag, it’s appearance in the GrooundMap tag cloud increases in size – meaning the more relevant the tag has become.

While GroundMap’s concept may not be ground breaking as other services might have featured it before, what makes it different from the rest is its ability to give you different sources of social media under one tag.

GroundMap is a pretty useful online tool. Â It’s like other social bookmarking and recommendation sites such as Digg and Delicious done in a new way.

Check out the video demo for a more detailed explanation of GroundMap’s features. Are you a fan of Digg’s online TV shows – Diggnation, The Dig Reel, Digg Dialog, and Diggcetera? Â Then, you’ll Â be glad to know that Digg has rolled out a one-stop destination for all these shows – dubbed DiggTV.

DiggTV lets you watch the said shows from the site or you can subscribe to the shows in iTunes, Miro, Tivo, Vuze and Zune channels. END_OF_DOCUMENT_TOKEN_TO_BE_REPLACED 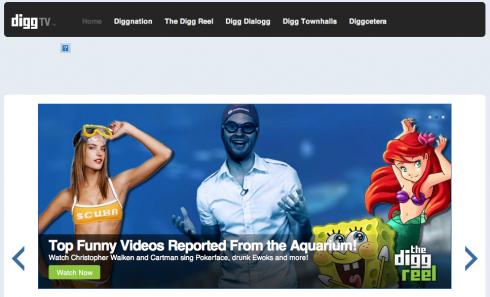 New media news meets new media memetics as Hitler is informed that his Hotmail password has been leaked.

Anyone who underestimates the social value of Net savvy should learn something from this video: the social consequences of making bad online media recommendations. I wouldn’t want to be Fegelein right now.

You know you’ve delivered a fantastic performance when it’s perennially parodied in new media. Bruno Ganz’ brilliant portrayal of a ranting Hitler from a dramatic scene in 2004’s Downfall was first given parody subtitles as a rant about Xbox Live in 2006. Three years later, an eternity in Internet time, the Hitler rant parodies are still going strong.

Perhaps this is the new measure of a timeless performance: mashability.