Amazon is the oldest and largest online retailer in the US. It initially started life in the mid 90’s selling books but now sells a variety of products from DVD’s to toys and even furniture. Below is a graphical representation of their growth and success over the last 15 years.

As always, if you want to see everything I am writing about nextMEDIA, please check out BrandingDavid.com where I’ve placed an index for all of the posts I am doing around the Splashpress Media network.
This is the panel that I was most looking forward to at the event. Nadia Nascimento and Will Pate, but panels are difficult to write about in a blog post format. Hopefully, most of the best content from their answers translates well.

What is the model around the community you are trying to grow?

Diana – Cineplex.com is a website for entertainment that includes social tools to compliment and extend the experience that people are having with our site and in the theatre. We also introduced blogs with comments, and areas for photos and videos to be able to have competitions and contests.

They currently have 10,000+ members that is okay by them, but they want more engagement but are still learning what works and what doesn’t work in growing and advancing the community and their bottom line revenue.

END_OF_DOCUMENT_TOKEN_TO_BE_REPLACED

I like to treat myself to an inspiring work area. That’s why my office has a nice red couch, gaming consoles although I don’t review much anymore, great speakers for my computers and stuff like that. I want to feel inspired to do things when I sit down in the morning with my coffee.

I also like to have great tools to save time as well as make it more fun to work. Let’s face it, it’s a lot more fun blogging on a MacBook than it is doing it on a crappy PC from 2001, with a flickering CRT monitor and a yellowish keyboard that should’ve hit the garbage bin years ago. END_OF_DOCUMENT_TOKEN_TO_BE_REPLACED 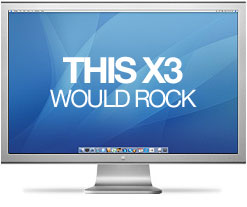 Aggrega‘s concept is great: a Pandora for music videos (it also has a photos section that I haven’t tried). Unfortunately, while it’s home page looks inviting, and its playlist page is cleanly laid out, it’s “create channel” algorithm is sorely lacking. Pandora’s algorithm shines, being able to offer very relevant suggestions when you specify an artist name or song title. Aggrega’s not there yet.

For example, I entered two artists from the 1980s as “seeds”. (They were not obscure, but I can’t remember what I used.) Aggrega came back with a ginormous list in two very widely separated columns. It was painful trying to checkmark and scroll down, checkmark and scroll down. This is the first thing that has to be fixed, followed by better relevance. This morning, though, I tried “U2, Elvis Costello”, and it produced a list of about 4 artists, including U2 twice. Not sure what that’s about, and there were no recommendations for additional, similar artists. Except that one that I’d never heard of. Surely there are other artists to recommend. I can think of half a dozen British acts that match Costello’s “angry young man” years.

Yes, I know Aggrega’s in beta, and yes, I really think I could love Aggrega, but not just yet. For now, it’s just flirting with me, teasing me with what could be. For the time being, I can produce a more compact visual content using SplashCast and YouTube, building a complete music video channel in a single player, with auto-forward between videos.

However, if Yahoo and Microsoft are on acquistion sprees, to keep up with Google, here’s my suggestion. One of you pull out your wallet and buy both Aggrega and Pandora, then combine their functionality. Do that, and you’ll have one of the coolest applications online. If these video “channels” can be transferred to a portable video device, even better. And if you merge, like the Friday blogospheric buzz indicated, then you can’t lose. Right? MindMeister, a web-based mindmapping tool, has finally gone live as of last week. As a hardcore mindmapper, I’m always big on trying out these new tools. Mindmapping is ideal for brainstorming as well as planning, and can be both a business and personal productivity tool.

While MindMeister is nowhere nearly as full-featured as standalone mindmapping apps such as Mindapp, MindManager or ConceptDraw Mindmap, what it does have is collaborative features: sharing of maps, email messaging, and text message alerts via Twitter. Other features include copy/paste between maps and import from MindJet MindManager maps. (There are several new features, but I’m not linking to the page because for some ridiculous reason MindMeister makes you login to see the change list. Instead, here’s the premium features page.)

If you want to check out MindMeister, the free basic version will remain without restriction of features until May 31st. After that, you’ll need to pay to get premium features. Cost is US$4.16/mth (Eur 3.21/m).

Can MindMeister survive against web competitors Bubbl.us and Mindomo? Well, Bubbl.us is a bit lacking in advanced features at present, and Mindomo is far more featured. However, Mindomo doesn’t have have all the same collaborative features (you can share). Of course that may change. At present, Mindomo has the slicker interface, closer in resemblance to standalone mindmapping.

The premium version of Mindomo is listed as Eur 4.99/m, so MindMeister has the cost advantage. For casual mindmappers, either one is more cost effective than spending US$199-$349 for a standalone package. (If you’re really on a budget, try the free Freemind. Both MindMeister and Mindomo can interact with Freemind maps.) With the exception of collaboration features, however, none of the web-based tools are powerful enough for hardcore mindmappers. Not yet anyway, and not for me. 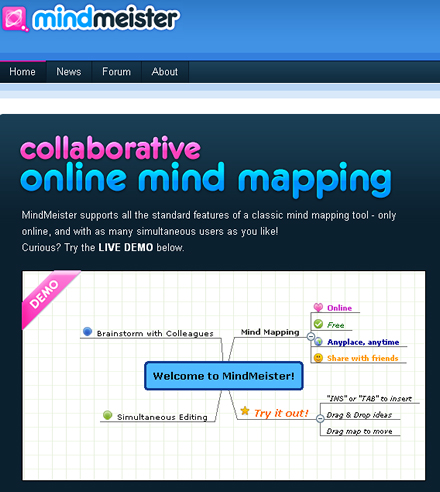