Technology spelled the death for a lot of things we thought we could never live without. Since 2000 alone, there are several machines, careers, lifestyles and businesses that have gone out of style and been replaced by the advancements in technology and the internet. Photographic film, maps, fax machines, the separation of work and personal life, travel agents and movie rent shops are only a few of the casualties.

Yet there remains one thing that hasn’t lost its appeal to people of all ages – the paper planner. Like Vans and the Mini Cooper, paper planners have their own cult following, and quite a few brands have their own staunch loyalists who buy their planners yearly even while keeping to-do lists and appointments in their iPhones.

Paper planners are a throwback to the ‘80s that don’t make you feel like you’re a technological simpleton for carrying one in this digital age. They’re still cool, and make you look intelligent and successful. Plus, they’re designed to be optimally functional and easy to use.

Here are some of the reasons why paper planner advocates will never be a dying species, in spite of the deluge of smartphones and tablets in the market.

1. Almost everyone who has a

planner likes the sensory feel of paper in their hands, the flipping of pages and the glide of pen as they write.

2. You can carry small items inside your planner, such as receipts, rubber bands and paper clips. Some planners have a lot of extras, too, that are fun, such as stickers, post-it pads and quotes on the pages.

3. Some people have a clearer grasp of their schedules when writing on paper rather than typing on the touch screens of their phones.

4. Unlike mobile devices, you don’t need a battery to view your tasks and schedules. You don’t have the risk of your gadget suddenly crashing while you’re writing or not having internet connection for your online planner.

5. There’s no danger of accidentally deleting the lists, schedules and appointments on your planner and your kids won’t borrow it to play games or watch videos.

6. You get a better sense of achievement when you cross out a finished task that you have written on your planner than deleting, doing a strike through or writing “done” of the task on your smartphone.

7. You don’t need to sync your paper planner with your other gadgets, and there’s no risk of it being made public on the internet.

8. The likelihood of accomplishing what you’ve written on your planner is greater than if you use a digital planner. Studies have shown that visibility of one’s schedule reminds you of your goals and lists. In a smartphone, tablet or PC, your schedule is not conspicuously displayed because you use your device for other functions.

9. For project planning, structuring goals and exploring of ideas, the paper planner enhances your creativity.

10. You don’t have to keep up with new designs when you use digital planning apps. Paper is constant and timeless.

11. Paper planners are cheaper than smartphones. 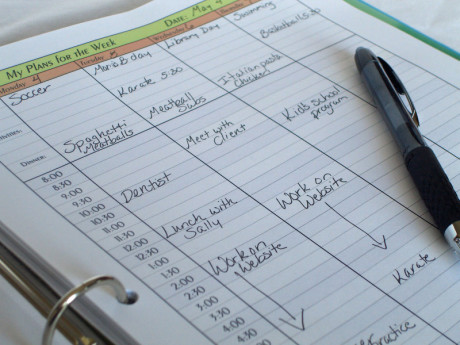