Screen real estate has always been about “the bigger, the better.” It goes for computer monitors and TVs. But one situation where a bigger screen may become a turn off at some point is with mobile phones. A bigger screen will mean a bigger phone and when phone manufacturers began using 4-inch screens and then with Samsung releasing the Galaxy Note that has a 5.3 inch screen, the upper limits of screen size may have been reached.

The great success of the Galaxy Note may be attributed to its screen size and amazing screen quality. A winning formula will not go unnoticed so LG has also announced that it will be releasing a new phone that will sport a 5 inch screen. But while the Galaxy Note has a 16:10 screen, LG’s Optimus Vu (Optimus Sketch in other countries) will be sporting a screen with a 4:3 aspect ratio.

The resolution of the Optimus Vu’s screen is reportedly going to be 1024 x 768, which confirms that it will be a square screen. Using the said resolution is actually a pretty good idea because a majority of web sites are optimized for the exact same resolution, which will make browsing much easier. Photos taken with point and shoot cameras are also in the same 4:3 aspect ratio.

Under the hood, the LG Optimus Vu will be powered by a 1.5Ghz dual-core processor and one gigabyte of RAM. It will have an 8 megapixel camera that is capable of taking full HD videos. These features all point to the possibility that LG is going to market this to the same people who liked and bought the Galaxy Note. 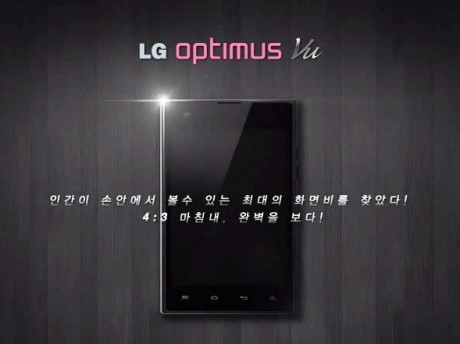