Following the release of Twitter iPhone app, it’s now time for the official Twitter for BlackBerry to get some attention and loving. The Twitter folks has just updated the app which is currently in beta and brings in several great new features as well as enhancements to existing ones. The updated Twitter for BlackBerry app now features – quote tweet, username Â autocomplete, go to user, personal information guard, additional photo viewing support, viewing of geotagged tweets, and new navigation hotkeys.

The new version of Twitter for BlackBerry now lets you quote a tweet simply by selecting “quote a tweet” from your phone’s menu options. This new feature adds quotation marks around the original tweet so much so that you can edit or add some more text to the original tweet. This is different from retweet since it doesn not automatically Â put the “RT @username” syntax as soon as you click on the “retweet” button. Â Actually, it does act like “retweet.” minus the “RT.”

When typing “@” followed by the first few characters of the username, this feature will pop out a list of users as you type. It’s a pretty useful tool especially if you are trying to recall the complete Twitter name of a person that you are following on Twitter.

The updated app also lets you view tweeted photos using YFrog and TweetPhoto as well as new navigation keys to help you navigate through your Twitter account. Â These new hotkeys are:

Ready to update? Check the upgraded Twitter for BlackBerry beta app from the BlackBerry App World. 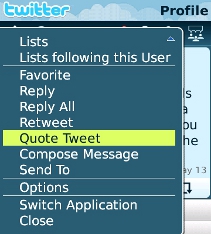