Another day, another Internet research findings. This time it’s from Pew Internet Â saying that more Americans are turning to the Internet to get their daily news fix, rather than the traditional print newspapers and radio.

Pew Internet’s study on “Understanding the Participatory News Consumer” Â revealed that 46% of Americans are getting their news from four to six media platforms/online sources including social networking sites, Twitter and Facebook as well as on their mobile phones. Â Only 7% get their news from a single media platform.

Pew’s findings also revealed that 33% of mobile phone owners get their news from their devices, 28% have personalized their mobile phone’s home page to include news from various sources and on topics that interest them and 37% of internet users have contributed to the creation of news, either by commenting or disseminating them on various social media sites such as Twitter or Facebook.

What’s peculiar about the current trend on reader behaviour is that news is being shared socially. Just like when reading a newspaper and you find an item that is interesting enough, you share that news orally, but now, news sharing is done almost as quickly as you’re done reading them – through social media tools.

Other key findings of the Pew Study include:

So, how are you getting your daily fix of the latest news? Through the Internet? Newspaper or Radio still? 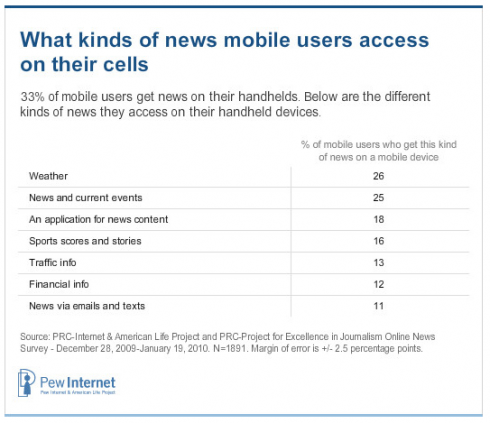