So you got a new BlackBerry handheld device and is now starting to explore the great BlackBerry Messenger (BBM). The problem is you don’t know of any friends who are as cool as you who happen to have a BlackBerry phone as well. So that renders your cool BB Pin and BBM useless. Here’s a good news. Why not start sharing your PIN to others? Put it in your Facebook profile. Sounds good right?

A new BlackBerry Facebook app just became available, allowing you to put your BBM QR Code to your Facebook profile so that other BBM users who happen to be in your Facebook network can scan it and add you to their BBM buddy list.

It’s a pretty clever idea. Something that I would definitely want to try since I really haven’t maximized the use of my BBM since I got my BlackBerry phone. To try this one out, just head over to the bb_barcodegenerator app on Facebook. You will be asked for your BlackBerry PIN, choose a layout for your BB QR Code, then have the app generate it for you. From there you can opt to display the QR Code on your Facebook profile, either in the sidebar or overlaid onto your profile picture. Then wait till your friends and others within who can view your profile scan it and add you to their BBM list. Then you can start chatting away.

The barcode generator works with BBM running on version 5.0. So if your phone’s BBM is still on an earlier version, now may be the right time to update. 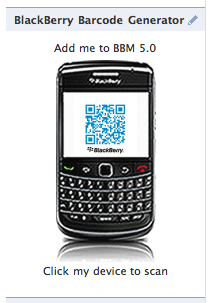