With several mobile phones running Google’s Android platform already out in the market or are about to be released by current popular mobile phone makers, who woud have thought that Motorola might actually come up with possibly the best Android phone of them all?

I mean, Motorola has been struggling to join the likes of Apple, Samsung, Â HTC and even LG into the “smartest” phone niche but never seemed to get it right. Until now, as the Motorola DROID was finally launched. This early, Motorola DROID is gaining some accolades from industry analysts.WSJ Matt Mossberg got an early hands on with a working unit of the Motorola DROID, and reading his review, you could easily tell that he was more than please with the said smartphone. He mentioned some minor flaws and shortcomings of the phone which render it inferior with the iPhone, but still he was all praises with the Motorola DROID.

Some highs of the Motorola DROID include – ability to run multiple apps at the same time, bigger and sharper high resolution 3.7-inch screen, 5mp camera, 6.5 hours battery life and more. While the lows include – 25% heavier than the iPhone, no multi-touch feature, awful keyboard, and lesser panels for displaying apps.

The Motorola DROID will be available through Verizon network for $200 plus two $70 monthly service fee and two year service contract.

It seems that Motorola has finally did it right this time. But still, it’s still to early to tell whether mobile phone users would actually shift to Motorola DROID. If that happens, three companies will be more than happy – Motorola, Verizon and Google. 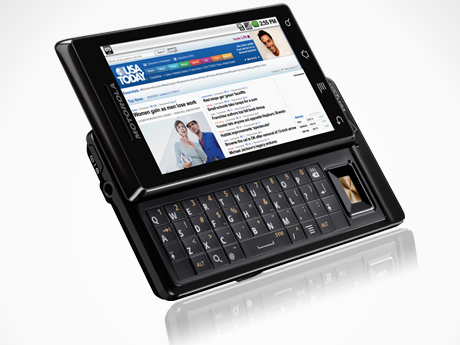