comScore, a company which measures browsing behavior by consumers, was out today with Q1 2007 Internet yellow page search data. This data reflects a growing trend in the number of those who conduct these types of searches.

comScore said the number of searchers thus far has grown by around 21 percent, though the number of searches themselves rose by just five percent. This light growth is attributed to lighter searchers now using online yellow page style Web sites. The data captured over the last year reveals Yahoo to be the market leader with 22.4 percent of these types of searches, with Google trailing behind in fourth place at 12.1 percent.

The perhaps one surprise of these metrics was the 85 percent gain in searches by the Yellow Book Network over the last year. This can largely be attributed to a major national TV advertising campaign, as well as strategic partnerships. 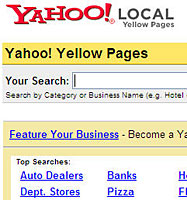